“I’m really not going to drink much today.”

I spoke those famous last words around noon on St. Patrick’s Day in 2005.

I was working in sales for a fortune 100 company at the time.  Since our region was above plan at that point in the year we all left work before lunch and headed out in Baltimore to partake in the St Paddy’s day festivities. 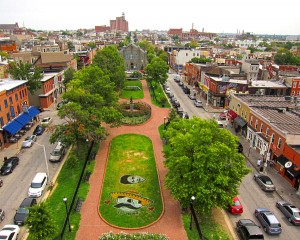 We went to Canton Square, which is an area in Baltimore with bars up and down both sides of the street.  It was jammed packed with people and the lines for the bars were very long.  Even before noon.

A friend of mine was bartending at the bar we went to.  As soon as I saw him I ordered drinks and shots for everyone.  It was on the company tab so I ordered several rounds.

About an hour after getting there I was struggling to keep it together.  I don’t know how many shots and drinks I had in that hour.  But I’m pretty sure it was too many.

My memory of the next 2-3 hours is pretty foggy.  This was during a period of my life where I blacked out about 50% of the times I drank.

Apparently I left the bar around 3:30 in the afternoon (My memory about the day kicks back in around this time). I found myself sitting on a bench in the middle of Canton Square eating a pit beef sandwich.  There were cops out everywhere patrolling the area to make sure drunk people, like myself, weren’t causing too much trouble.

One police officer rode past me on his bike while I was sitting on the bench.  I decided it would be a good idea to throw the rest of my pit beef sandwich at him.  The sandwich bounced off his bike helmet and he stopped immediately.  He looked around for what hit him and who had thrown it.

Unfortunately for me, my St. Paddy’s day shenanigans captured the attention of another cop who watched the whole incident unfold.  He quickly rushed up to me and pulled me off the bench.  He informed the other officer what I had done.  They weren’t very pleased with me to say the least.

They put me in handcuffs and escorted me through the square in front of thousands of people.  Including several of my co-workers.  That was fun explaining on Monday morning.

I kept asking the officers why they were detaining me.  “What did I do wrong?”  They told me I was going to jail for assaulting an officer.  My only reply was, “With a pit beef sandwich.”  This reply was met with an even greater level of contempt for me.

They threw me in the back of the police car and were about to take me to lock up for the night.  Fortunately for me, a more serious situation arose that needed their attention.  They released me with a criminal citation and told me to go home.

The mile or so that I  stumbled back to my house was brutal.  I’m not sure why I didn’t take a cab.  I tripped over a curb, smashed my chin off the ground and bled for the rest of the walk.

I woke up the next morning to find the criminal citation on my nightstand.  It was all crumbled up and I couldn’t quite make out what it said.  However, I did recognize the words “Pit Beef Sandwich.”

I ended up having to hire a lawyer and go to court for the incident.  Luckily for me The criminal citation had the wrong statute number on it and the DA didn’t want to go through the hassle of getting it changed.  My lawyer squared things away and all the charges were dropped.