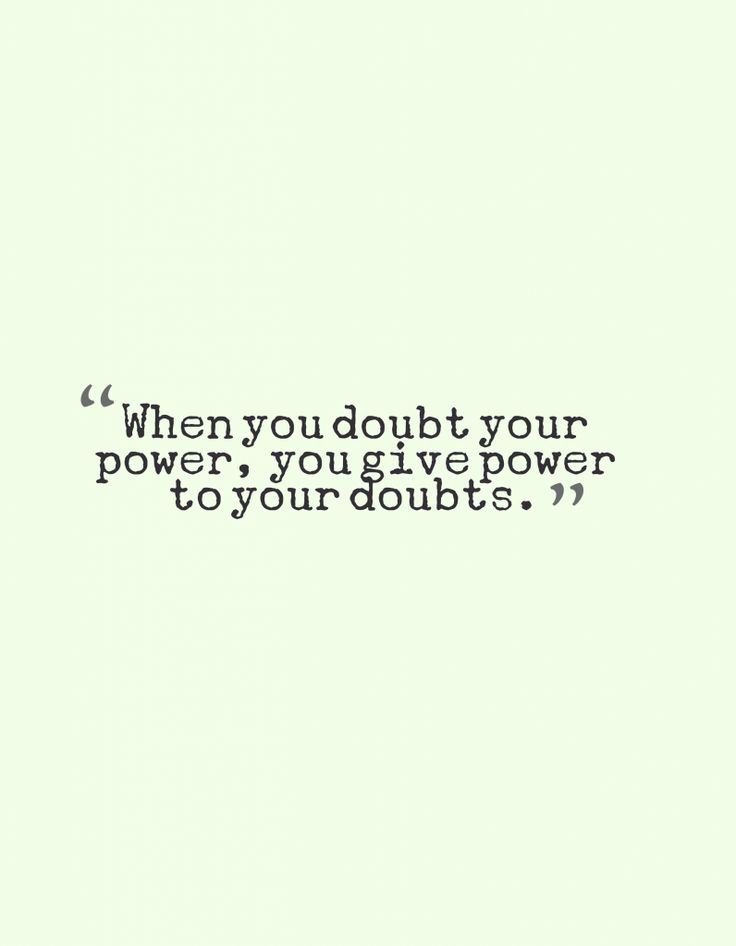 I doubt myself everyday.  I wake up ready to take on the day with my to-do list and a positive attitude.  Then I don’t have a good workout, my stocks lose money, everything I do seems to take twice as long to complete as it should and I start to picture my life as a failure.  I visualize my portfolio going to zero, running out of money, never making another dollar in my life, never finding someone to share my life with.  Then the daydream nightmare stops.  There isn’t anything past that.  My mind can’t process anything after I’ve lost it all.  I don’t see myself committing suicide or living on the street, there is just nothing.

Maybe my mind stops because it knows there is very little chance of any of this occurring.  Or possibly I have become so accustomed to living a fairy tale life I can’t even perceive what that type of financial hardship would create.  What life would look like having to work a dead end job to make ends meet and live an existence which is tantamount to “just getting by.”

I’ve lived a life where I didn’t have to work very hard, in comparison to others, to have nice things and lots of free time.  I’ve made my own schedule for the last 7-8 years and rarely had legitimate financial worries.  The thought of my life changing from what I’ve become accustomed to scares the shit out of me.  I don’t want to be on someone else’s schedule, working on the time frames they create for me.  I don’t see myself allowing my life to go in that direction.  But the reality is it could occur one day and the lifestyle I’ve become accustomed to would die.

I fear wasting the time I have left to live.  Continuing along with the same bad habits which have kept me from having exactly what I want.  I always feel as if I am so close to turning the corner in so many areas of my life, but I cant quite get there.  Something unexpected happens and I never quite recover.  I get disappointed and become guarded which makes me want to avoid taking risks and being vulnerable because I’m afraid to face the pain of failure again.

My relationships are perfect example of this type of behavior.  I find someone I develop feelings for, then I look for any reason why they aren’t good enough or why we don’t fit together.  I sabotage my relationships because I don’t want to hurt anyone or get hurt.  In the process I end up hurting everyone much worse.  Once I’ve destroyed the relationship I realize what I’ve done and I want to repair the the damage I’ve done, but it’s usually too late.

The vast majority of the pain and suffering I bring into my life is from Self-doubt created in my mind from fear.  Very rarely is it predicated upon solid evidence from past failures, at least in my experience.  Don’t get me wrong I’ve failed and looked foolish more times than I can count, but my self-doubt doesn’t come from those incidences.

I grew up a weak, scrawny child who lacked self confidence.  I sought attention in all the wrong ways.  I was afraid to share my ideas or try something new and look foolish or stupid because I never had a positive male role model instill confidence in me.  When it was crunch time and someone had to make play in order to win, I never wanted the ball in my hands.  I was too afraid of failing and letting others down.  I rarely had it in me to be a leader and made difficult decisions when the game was on the line.

I always doubted myself in part because I had a father who would tell me and make me feel I wasn’t good enough.  He wreaked havoc on my confidence by pointing out all the times I made mistakes or played poorly in sports.  This made me feel like a failure.

In some ways I think he wanted me to fail because like he had with his businesses.  I remember being on the phone with him my senior year in college, three months from graduating, having him tell me I should quit school and come back home.   He would tell me I should take a safe job with Penske and live in my hometown forever.  He knew I hated my hometown and I wanted more for my life.

Anytime I was struggling or he saw opportunity to plant the seed of doubt in my head, he would tell me I needed to move back home where it’s safe.  As I’ve gotten older I realize he was sick person who didn’t know better and didn’t take initiative to learn how to relate to his child.  He emulated what he saw as a child from his mother.  Even though it damaged him, he parented in the same type of manner.  I think he feared my success.

How my father treated me is no excuse for my lack of action and character flaws as an adult.  I’m the only one in control of my own life.  Blaming others for my problems and issues is the weakest of cop outs.  If I want something bad enough I have to put the time and hard work necessary to achieve it.  When you break it all down it’s really that simple.

My mind is my own worst enemy.   It wants me to think negatively because it happens naturally and takes no effort.  Staying positive and remembering all the good my life holds is very difficult.  Research has shown the brain can more easily access bad memories rather than good memories because of the location and the manner in which the brain stores these negative experiences.

The brain detects negative information faster and is more biased towards avoiding displeasure and risk.  This stems from evolution when humans had to decide whether to go after a mate or food and risk the chance of being eaten by a predator or holding off until they knew everything was safe.  Risk aversion is what kept early humans alive.

We no longer live in a world where we have to fear being eaten by a predator.  Instead we worry about how we look, the numbers in our bank account and how people view us.  We fall victims to the walls and limits we set for ourselves.

Doubt is natural and normal.  In some ways it can be helpful by keeping up grounded and not thinking overly grandiose causing us to make poor decisions.  Especially if the doubt is based on factual information and proven track record of failure.  However, it can also be the most detrimental emotion we have.  Doubt kills dreams and keeps up from ever trying to reach for what we truly want for our lives.  We allow doubt to tell us we aren’t good enough, smart enough, attractive enough to get what we want our of life.  It gives us and excuse to never take risks or step outside of our comfort zone because we already assume it wont work out.

A life that is free and fulfilling can’t be consumed with doubt.  I’m not saying it wont exist, it will.  However, tuning out the self-doubt and chasing your ambitions, albeit difficult as it is, makes life worth living.  You may not make it, but it becomes easier to try in the long run than to wonder “what if” and live full of regrets.  In my mind, trying and failing to reach my goals has been much more exciting and less disappointing than when I allow doubt to win and watch life pass me by.