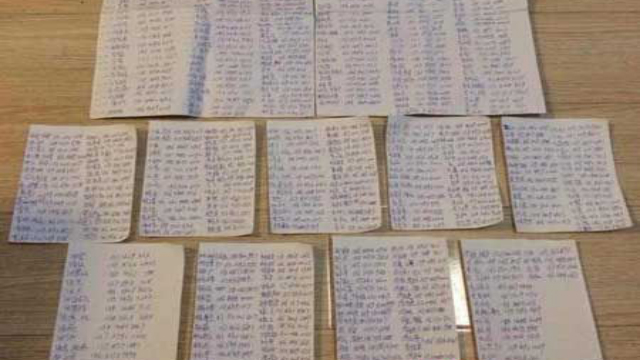 I used to keep a list of all the girls I slept with.  I cherished my list.  It was kept tucked away in a safe spot for my eyes only.  It was comprised of mostly first names, nicknames or the location we had sex.  Very few full names appeared on the list.  I rarely knew the person long enough to find out her last name.  Or I didn’t care enough to ask, one of the two.

When I was 27 I moved in with my girlfriend and destroyed the list.  It was the first time I had ever lived with someone I dated and getting rid of it seemed appropriate.  I won’t get into how many names were on the list, but it was enough to make most people judge me.

Keeping a list was incredibly immature.  It’s how I kept tally of how “manly” I was.  I would joke and brag about it to my friends.  It was essentially my way of having a dick measuring contest, without the embarrassment of having to measure my dick.

To this day, I find myself counting the number of girls I slept with in a given time frame.  I keep a mental list and use it to validate myself that I still have “it.”  Whatever “it” is.

After my break up all I wanted to do what get laid to prove that I still could.  I needed to show the world I was back and I was desirable.  Women wanted to sleep with me God damn it!  It felt like a right of passage as a man.

In February I broke out of my brooding slump and found myself attracting women pretty easily.  I got on a roll and was knocking them down one after the other.  I was on a heater!  It was as if my penis was struck by lightning and women could feel the electricity.  That’s probably a bad analogy, but my dating and sex life were on a meteoric rise.

As time past I became so focused on women and sex that I lost track of some of my personal and professional goals.  I only wanted to party and get laid.  I was “crushing life”, or so I thought.  I was happy, but I was using sex and women to substantiate myself as a man.  I counted my numbers and bragged to my friends about how many girls I’ve been with in the last X amount of time.

Don’t get me wrong I had a blast.  I had my mojo back!  However, part of me used sex to block certain feelings I didn’t want to face.  If I’m going to be candid I didn’t even enjoy sex with several of the girls I slept with.  I only did it for the story.

I used sex as a coping mechanism to prove I was over my ex.  My thought process was, if I slept with enough women, it would change how I felt about what occurred in our relationship.  And if we ever got back together one day, I would’ve slept with so many more people than she had while we were broken up, I’d feel I had the upper hand.  I would have proven to her that I’m the Alpha.  Horrendously stupid, I know, but that’s how my damaged mind works at times.

I was trying to fuck the pain away.  Using sex in the manner I did kept me from developing feelings for anyone else.  In my mind it was only sex and that made it safe for me mentally and emotionally.  I didn’t have to worry about becoming attached or caring.  Don’t get me wrong, I enjoyed hanging out with some of the girls I slept with, but I knew there was no future for us.  That was what made the interaction desirable to me.

I’m not going to say having sex with as many people as you desire is a bad thing.  It’s sex, it’s fun.  It helped me get out of my mental funk.  I don’t regret too many of the girls I’ve been with.  I will say racking up number just for the story was about my insecurity.  In the past I used women as a way to try to instill confidence in myself.  When they were gone my confidence disappeared.

When I’m single I love the rush of meeting new women and the anticipation of getting them in bed.  Ultimately it ends in the the disappointment and boredom I encounter once I actually sleep with them.  Usually about five minutes into sex I’m wondering why I spent this time trying to attain something I don’t actually want.

Would it change anything if I would have slept with 10 vs 100’s of girls in my life?  Would I  enjoy sex more had I not diluted the experience?  Maybe I be able to connect on a deeper level in a relationship via sex.

Numbers lie.  They don’t tell the whole story.  There’s more to life than any number; whether its your bank account, square footage of your house or the number of people you’ve been with.  Too much of anything will change how you value it.  Sex and women are no different.