In hindsight getting high and swimming with sharks may not have been the best idea.  I was bored and by myself while visiting Adelaide, Australia.  So I decided to get high and go to SeaWorld for the day.  It seemed like an exciting trip and I always enjoyed aquariums, especially stoned.

I walked around marveling at the aquatic life and taking pictures.  The shark tanks were the main attraction for me.   I noticed they had a sign posted by the tanks that said “swim with the sharks.” I quickly signed up to for the next available time and paid my fees and was ready for my adventure.  I had never swam in a shark tank so I was pretty stoked to do it.

The SeaWorld employees took a group of us back inside the inner workings of the aquarium.  They gave us our scuba gear and went over the types of sharks and sea life we would be swimming with.  The staff went over the ground rules of we could and couldn’t do in while in the tank with the sharks.  There weren’t too many rules to follow to be honest.  The main rule, and most obvious, was that touching the sea life was strictly prohibited.

None of the sharks in the tank were considered aggressive.  Which I found unfortunate at the time.  For some reason knowing that took away some of the excitement from the experience.  I’m not sure why the thought of possibly getting eaten was more appealing.  Probably because I was high and having some odd delusions of grandeur of fighting off a shark attack.

Once I got into the tank and swam around with these creatures it was a pretty amazing experience.  Having these sharks and other large fish swimming past me just inches from my grasp.  It was amazing to see them breezing through the water with ease as I struggled to get around.

After fifteen minutes of swimming around I noticed the front side of the tank had numerous people congregating at it.  People were watching all of us swimming with the sharks and taking pictures.  I swam up to the the people watching and posed a bit so they could take some pictures.  I was a bit of an attention whore.

I saw the flashes going off from the cameras of people snapping pictures for the photo albums.  I saw this as perfect opportunity for me to have some fun.  I was going to give them a memory they could laugh about and cherish for years.

A Leopard Shark had been resting on the bottom of the tank right in front of the main viewing area.  It had been there for the whole that I was in the water and hadn’t moved an inch.  I floated passed the shark several times grazing it with my hands. 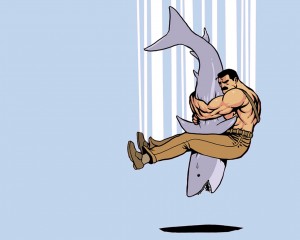 I swam up to the Leopard shark, laughing hysterically to myself.  I grabbed its dorsal fin and started to dry hump the back of the shark.  The shark still didn’t move.  The people at the window watched in disgust, while others snapped pictures.  I saw mothers putting their hands over their childrens eyes.  It caused a bit of a commotion.

I felt a hand grab my shoulder.  It was the SeaWorld employee who was in the water with us.  He signaled to me that I needed to leave the tank immediately.

Once I got out of the water I received a fierce reprimanding from the staff.  I was escorted off premises by security.  They told me that I was no longer able to set foot in the park or they would call the authorities.

I had a different view of what was acceptable and funny at 26.  Hell, I still would find it pretty funny today if I saw it happen.  Although, I probably wouldn’t be the guy humping the shark this time.  But honestly, how many people can say they got kicked out of SeaWorld for molesting a shark?!