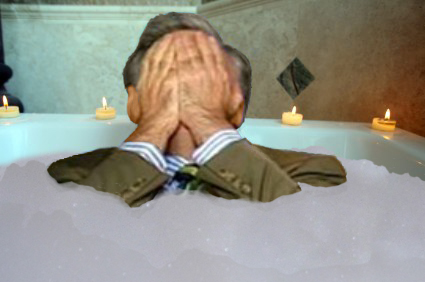 I didn’t care who I used or who I hurt at the time as long as I got what I wanted.  Most of the time I didn’t even enjoy having sex with these girls.  Normally, about two minutes into the act I would question what I was doing and the anxiety would set in.  The only thought in my mind was how I could end this nightmare and get away from the girl.  If I ever wore a condom, which was rare, I would fake an orgasm so I could stop and get out of the situation.

One particular occasion I was having sex with a girl and my anxiety rushed over my body like a flood.  My chest became tight, I couldn’t catch my breath and tI was sweating profusely.  It seemed obvious I was uncomfortable, but somehow she was oblivious to my plight.  I couldn’t take it anymore and I jumped out of bed without saying a word.  I ran to the bathroom, popped a Xanax, turned the shower on and laid down in the tub letting the water cascade over my body.

After a few minutes the girl came into the bathroom to check on me.  She asked if I was ok and pulled back the shower curtain to find me huddled up laying in the tub.  I could tell by the look on her face she was appalled and rightfully so.  We didn’t exchange words.  She merely shook her head and left my house.  We obviously never spoke again after this encounter.

I’m highly damaged, I realize this.  I also realize I used women and sex like any junkie uses drugs.  It produces a high for a very short period of time followed by a drastic crash.  I was doing things I didn’t truly want to do once I became cognizant of my actions and how they made me feel.  It was an out of control feeling of using an exogenous source in order to fill a void I felt.

I don’t think most people are used to hearing a man talk about sex in this manner.  Many men, including myself in the past, would look at this post and call me a pussy, weak or feminine.  I’ve read articles where women talked this way and I would write it off as their poor excuse for being a whore with no self-respect.  The truth is I’ve always been judgmental of others for using sex the way I have because it’s a part of myself I hate.   I didn’t respect myself.  The things that usually bothers me the most in others are the characteristics I portray that I loathe about myself.

I’m not saying I’ve changed.  I still fall prey to my own inability to control myself.  However, I have become more self aware and introspective with regards to my thought process and actions.  Understanding and defining a problem is the first step to making changes.  I’m not sure able to give the best advice on how to fix this problem, but I can share how to diagnosis it.

I’m certainly not saying sex is bad or that I don’t enjoy it and need it, because I do.  I’m not some bible thumper saying sex should only be for procreation otherwise it’s evil.  I do not subscribe to that dogma in any way, shape or form.  However, there is a difference between having fulfilling sex, even if it’s with someone you just met that night, and using sex to bolster a false sense of self esteem or value.  One can be fun and amazing, while the other can leave you laying in a shower hiding, hoping the evil lady in your bedroom leaves before she finds you in a horribly embarrassing predicament.