I used to be a partner in a nightclub in Philadelphia.  It was possibly the worst investment I have ever made as far as money is concerned.  I dealt with some of the worst people the city had to offer.  Several of my partner were unscrupulous to say the least.  But, I met a lot of really good friends over that time and the experience I gained was worth the loss on paper.

I sold my stake in the business four years ago.  Some of my partners stayed in the business with the new investors and they turned it a EDM club.  When I was involved it was a hip hop club in the Philly Urban scene.  Complete opposite sides of the nightlife spectrum.

Their first year in business they booked some of the biggest DJ’s from around the world to play there.  Many of my friends and former colleagues still worked there so I decided to treat the place like my personal playground.  I brought whoever I wanted there through the side-door, never paid for a drink and got in fights constantly. 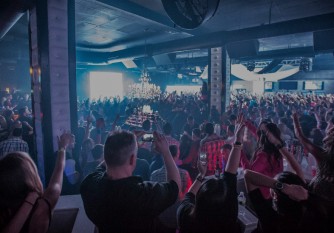 The grand opening event was sold out.  There were more than 1200 people there that night. My friends and I partied our asses off.  At one point I walked up to the main bar, broke out a line of coke and sniffed off the bar in front of hundreds of people.  No one seemed to notice or care.

I left my friends at our table and made my rounds through the club.   I ran into a stripper I occasionally hooked up with.  When she saw me she started yelling and dancing around with excitement.  She immediately left the person she was talking to and jumped on me.  She wrapped her arms and leg around me and kissed me.

I carried her away with me through the crowd and into the clubs office.  Several of the employees were in the office working so we went into the private bathroom.  We kissed and did a couple bumps of coke.   Then, I bent her over and licked her ass.  Once I got hard I put my dick in her for a couple of pumps before someone started banging on the bathroom door.  I knew I wasn’t going to finish so we stopped and walked out.

I told her I would see her later and I went back to my table.  A close friend of mine asked where I had been and why my face smelled like an asshole.  I told him the story and the rest of the night he called me “stinky-butthole-face.”

Not too long after that I wound up being the douchebag wearing a wife beater in the club.  I was so drunk I kept trying to drink out of a cracked cup and spilled all over myself and everyone around me.

My friends and I went back to my house and kept the party going.  Around 6 AM only two of us were left standing.  I received a phone call from the stripper and she was crying hysterically.  She told me that her and her boyfriend had gotten into an argument and he punched her.  Unbeknownst to me, the guy she was talking to in the club when she started kissing me was her boyfriend.

I felt like a dick about the whole situation.  But not enough to do anything about it to help her.  I was drunk and coked up in the wee hours of the morning.  I wasn’t equipped to help her with her problem.  I told her I wasn’t sure what she wanted from me.  That ended the call abruptly.  Then I took a Xanax and went to bed.