Our first date was one of the most awkward and uncomfortable experience of my dating life.  We had been set up by a mutual friend.  My humor and charm were completely lost on her.

We had gone to a party together and barely spoke.  I couldn’t wait for the night to be over.  Yet at the end of it she still wanted a second date.  As dull and dreadful as I found her personality, her physical appearance made me want to give it another shot as well.

Her life was a bit complicated.  She was living with her husband awaiting a divorce after she had caught him cheating.  My sick attraction to that kind of chaos weighed heavily on my decision to see her again.  I was drawn to the drama.

A couple of weeks later we agreed to meet at a new Mexican restaurant for dinner.  I arrived on time, as I always try to be punctual.  She had texted me and told me she was running a little late because she had to stop at CVS to pick up a prescription.

The food at dinner was amazing.  Our conversation was better than the previous date.  However, it still felt forced and awkward.  I asked her questions about her life and job in hopes that she would open up, but most her responses were one word answers.

With dinner winding down I asked if she wanted to come back to my place afterwards.  Without hesitating she said yes.  As I paid for the bill she opened her handbag at the table to get some lipgloss out.  when she reached into her bag her prescription she had picked up at CVS fell out onto the table. 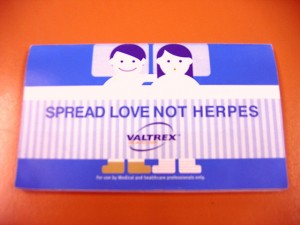 I looked at the bottle and in big bold words it read, Valacyclovir.  I recognized the label from commercials.  It was the generic form of Valtrex.  My face dropped as I saw her slowly put the bottle back in her bag.  She saw my face, but never said a word about the fact that I saw her herpes medication fall out onto the table.

I decided at that point to make this date an experiment.  I was going to take her home and see how far she would let me take things before she either A) told me to stop or B) told me she had herpes.  As we hooked up I kept waiting for her to say something, but she never did.  She just allowed things to progress more and more.

Right before I was going to seal the deal I stopped myself.  In my mind all I kept thinking was, “this dirty bitch really isn’t going to stop me or tell me.”  I couldn’t do it knowing that getting herpes was a possibility.  I had made it that far in my life without catching anything that wasn’t curable and I wanted to keep it that way.

Sadly enough it took me a third time of hanging out with her before I could cut it off.  She came to my house and brought her dog along.  She babied him the whole time and wouldn’t let him play with my dog.  At one point she even let her dog lick the inside of her mouth repeatedly.  That made me a little uncomfortable.

The trifecta of her boring personality, making out with her dog and the possibility that she had herpes proved too much even for me.  I couldn’t hack it anymore and never saw her again.  Apparently she’s married with children now.  As I look at it as we both won.  She has her family and I don’t have herpes.