In May of last year one of my closest friends took his own life.  Mark was only 42.   A mutual friend of ours called me and told me the news.  When I saw his name come up on my phone I had an eerie feeling something had happened to Mark.  I was devastated as I fell to the ground clutching my phone.

Mark was like a brother to me.  We had been through a lot together during our friendship.  We met at the gym and he became my lifting partner for years when I lived in Baltimore.  We both had a passion for fitness.  We always joked that no one else would train with either of us because of how much we sweat during our workouts. 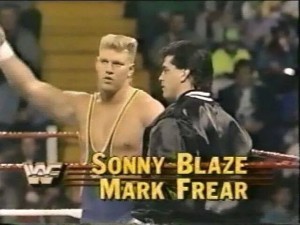 He was a talented athlete.  A former wrestler at the collegiate and professional level.  He even spent a little time wrestling in the WWF (now known as WWE).  He was tough nails but had the biggest heart.

Mark was a guy who gave all he had to anyone he could.  He was a very gifted personal trainer that had an uncanny ability to help others rehab through injuries and illnesses.  One woman came to Mark with a claw hand that she had not been able to use for years.   Through trigger point massage and several other techniques he was able to give her full dexterity back in that hand.  She had seen doctors for years and no one could help her the way Mark was able to.

The two of us had the same sick sense of humor.  We would say things to each other that most people would find incredibly stupid and immature, but we found it hilarious.  Most of the time we were just picking on each other about dumb shit we had done.  He had the most amazing and infectious laugh I’ve ever heard.

Mark was one of the few people in my life that I could be myself around.  I never worried about what I said or how I acted.  Every time we saw each other I would tell him I loved him before I left.

Mark had talked to me about suicide in the past.  I had talked him down from the ledge many times before.  But this time he was set on doing it and he never reached out.  I guess he felt he didn’t have the strength to come back from what he was going through.  It makes me so sad to think he didn’t realize how many people loved him and would had done anything to help him.

I was fortunate enough to have the opportunity to say a few words about Mark at his funeral.  I was so filled with emotion when I spoke that the only part I vividly remember saying was  “Life is brutal but beautiful.”  Those five words summed up my feelings and the dichotomy of the life.

The brutality of this situation was very easy to see.  The tremendous amount of pain it caused everyone who cared for him was plastered on their faces in tears and sadness.  A man who was far too young decided to make a permanent decision for a temporary problem.  His pain had become so great that he couldn’t see that his life could possibly get better in the future.  The fact that Mark felt so alone that he couldn’t reach out for help.

The beauty of that day was in all the people that came together to show their love and appreciation for Mark.  To pay our respects and celebrate his life.  Sharing stories of how he had affected our lives and made us richer for having known him.  The serenity of knowing that Mark was no longer in pain and was in a better place.

I miss my friend daily.  His picture hangs on my refrigerator and I talk to him often.  I know hes somewhere smiling down on everyone he loves and probably laughing at all of my mistakes.  If only Mark could have seen the beauty we all saw in him he may still be alive today.

Life is hard.  We all know that.  But, it’s important to smile, take time for yourself and love people with all you have.  Find joy in your life everyday and look for ways to give back to others.  Life’s about the journey more so than the destination.  If you don’t take time to enjoy it daily you miss out on so much of what is amazing in this world.  There is adversity and brutality all around us everywhere we look. But life is also the most rewarding and beautiful experience we will ever have.