Back when Myspace was popular I was really into trolling the site for girls.  Social Media was pretty new at that point.  I feel like people were more open to the idea of meeting a complete stranger off the internet.  It seemed socially acceptable to message random girls on Myspace like you would a dating site today.  The conversation rate from message to date was pretty high for me, probably like 20%.

One girl from Myspace stood out among the rest.  Let’s call her K.  When I first saw her profile picture I was so into her.  She was tiny; maybe 5’1, weighed about 105 lbs, with brown hair and rather tan.  She looked a bit trashy, but I didn’t let that deter me from going after her.

I talked to K for two weeks off and on trying to get her go on a date with me.  She always had some excuse for why she couldn’t hang out.  Finally, one Thursday night she agreed to get together with me.

She lived in the the ghetto in West Baltimore.  She didn’t have her car (or so she said) so I needed to pick her up.  She jumped in my car and we chatted about life and work.  She told me she worked for a company doing HR.  I knew it was a lie, but I let it go.  These should have been a clues about the night I was going to have.

We went to a bar to have a few drinks.  The alcohol apparently fueled her ghetto side.  She was loud and obnoxious.  She started dropping the N Bomb while talking to people. Then justified saying it because she said she was part Cuban!?  I was embarrassed for the both of us.  The more she drank the more she became like a chick from Flavor of Love.

Even after I saw her behavior at the bar, I stuck to my plan and took her home with me.  I figured I was already in pain so I might as well get something out of it.  When we got back to my house around midnight I carried her up to my bedroom.  Clothes came flying off, spread throughout the room.  All was going to plan.

As I took off her underwear I noticed a really shitty looking tattoo on her pubic area.  It looked like it was done in a jailhouse or someones living room.  The tattoo was of a money sign and above it had the word “BUTTA.”  I didn’t stop to ask questions at that point, I just preceded with what I brought her home for.

She started talking a lot during sex.  But not in a good way.  She kept calling me “white boy.”  Then she told me “Im used to guys telling me, oh I want you to be my baby momma.”  Now I don’t know who the fuck she was sleeping with prior to me, but I couldn’t help but laugh at what she had said.  That laugh quickly turned into horror when I thought about the fact that I wasn’t wearing a condom.  At this point I was just trying to finish as quickly as possible before I went soft.

The next morning I woke up around 7 AM with pretty bad hangover.  I rolled over and asked K if she needed to leave to get to her job.  She looked confused at first.  Then she must have remembered the lie she told me about working in HR and replied “No my boss is out this week.”

She grabbed her purse from floor to get her phone out of it.  In doing so a box cutter fell out of her purse onto my bed.  For some reason this triggered me to ask about her about the BUTTA tattoo.  She told me it was her ex boyfriends nickname and that he had a matching tattoo on his neck.  I smirked at her.  She countered that smirk by telling me that he was locked up for a double murder.

She continued to tell me interesting stories about her life.  Like the boob job she got in South America.  I asked why she would go to South America to get implants.  Her response was “They were cheap.”  She claimed her implants looked great, but she had to have them removed.  Apparently the cosmetic surgeon in Colombia didn’t practice in the most sterile environment and she got a massive infection.

I had heard enough of her stories.  It was time for me to get up, shower and get ready for work.  But I didn’t really like the thought of leaving this chick alone in my room with my rolex, my money and my credit cards.  I grabbed my things off my nightstand and brought them into the bathroom with me.  I was pretty certain if I left them in the room she may vanish and take them with her.

While I was showering all I thought about was, I hope I didn’t catch anything or knock this chick up.  My mind replayed the fact that I didn’t wear a condom or pull out.  I couldn’t scrub my body hard enough with the soap to get the dirty feeling off.  I pictured the tattoo, BUTTA.

I would like to say that I dropped K off on my way to work and never saw her again.  But that would be a lie.  We hung out one more time.  It was more of a nightmare then the first experience.  I couldn’t handle her so I left her at the bar.  And that was the last time I saw Butta. 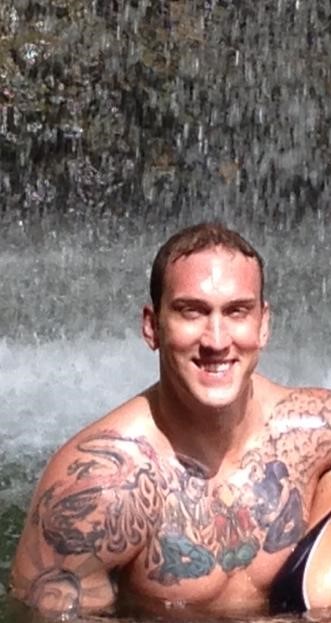 When I was 21, I started getting more tattoos. My best friend, Erik, was a tattoo artist.  I remember seeing a “tribally” looking dragon on a piece of flash.  At that moment I knew that bad ass dragon was going permanently on my right shoulder and trap.

Yep, I was certain this tattoo was for me.  Erik tried to talk me out of the tattoo.  But I was leaving for spring break in a month or so and I needed this tattoo.  (Yes the same spring break with the Mexican hooker).  So we sat down and he began to place this abomination on me.  Don’t get me wrong, from a technical standpoint it wasn’t a bad tattoo, he did a good job.

I sported this dragon proudly for a good year or so before I added more tattoos.  It was like a banner that told the world I was a douchebag and I know it.  I mean it wasn’t tribal band HOLY-FUCKING-SHIT douche level, but it set me apart from the pack of normal dudes.

I remember wearing tank tops to proudly display my dragon for everyone to admire. Fuck right doggy, that’s a fucking tribal dragon!  I’ve had several girls lay with me naked, looking at my tattoos, ask me why I have this stupid fucking dragon.

As I got more tattoos, filling out my sleeves and chest, this fucking dragon always got in the way.  It was like someone took a shit in the middle of painting and said “fuck it, lets just leave it there, I think it adds character.”

My whole right arm is done in black and grey with many great pieces which flow together very nicely.  Then its capped off at the shoulder by this fucking dragon.  I want to get it covered up, but I would have to put a big color piece over it.  That would kind of fuck up the scheme of my arm.  I could get it lasered off and start over, but I don’t want to endure the time and pain of that process.  So I’ll probably live out my days wearing my scarlet letter of douchery!

Come to think of it my chest piece is pretty shitty tattoo.  Megan Massacre from NY Ink did this tattoo before she was famous.  She used to work for my buddy.  I’m pretty sure she always hated me, so she tattooed a pile of shit on my chest.

At least I wasn’t as dumb as a lot of people and never got someone name or initials tattooed on me.  Love of Christ, what are those people thinking.  I have tried to talk so many people out of getting those tattoos when I used to be a partner in a tattoo shop.

Most people with tattoos have at least one really shitty one that they have no clue what they were thinking.  So yeah that was a post of just me bitching about my tattoo.  So whats your shittiest tattoo?  Share, we all know you have one