“Just swipe right as fast as you can for a minute straight.”  These were the directions my friend gave me as we embarked upon the most fun 15 minutes I’ve had in a long time.

A few months ago my friend and I got drunk at a Mexican restaurant and she introduced me to my first  drinking game using Tinder.  The rules are simple: Open the app and swipe right for one minute as fast as humanly possible.  Whoever matches with the most people during that round is the winner.  The loser of the round must drink one second for every person the winner matched with (i.e. 15 matches, drink 15 seconds).  Pretty simple right?

After three rounds of swiping right the fun part of the game starts.  By then each player should have at least 15-20 matches.  The final challenge is to get one of the people you matched with to send you a picture of their boobs or genitals.  This is where the game usually devolves pretty quickly.  The lowest common denominator came out quickly for me.

I made very little small talk with my matches and went directly for the win.  I wasn’t very tactful either.  I just openly asked if they would show me their boobs. 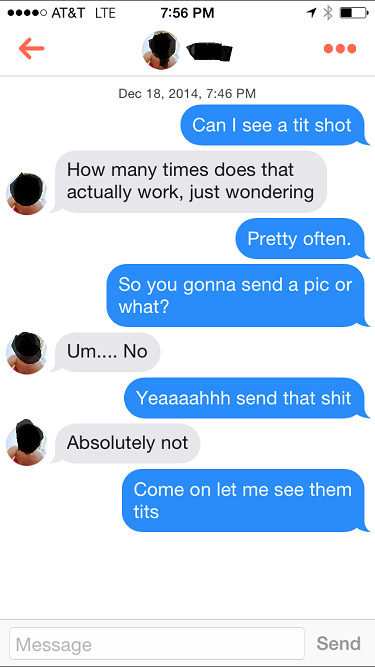 I worked the the quantity angle, trying to engage with as many of them as possible in a short period of time, rather than spending more time with 1-2 girls trying to cultivate a win.  Time is your enemy in this game.  I had to move quickly,  especially when playing against a girl.

The conversations I had with these women after asking them to send me a picture of their boobs was hilarious, yet sad at the same time.  Most continued to speak with me far after I had already crossed the line of good taste.  It really made me wonder how little some people have going on in their lives.  At times I felt bad about what I said for my own entertainment.

Not to make excuses, but I’m going to make an excuse.  As a guy I’m at a disadvantage playing this game against a girl.  I feel it is very difficult to find a girl who is willing to send a picture of her breasts within seconds of speaking with you.  Guys on the other hand are far too willing to send a picture of their dick to a girl if they think they are going to get laid.  My friend had three pictures of three different guys dicks within five minutes.

We laughed hysterically at the bar the whole time we played.  We caused a commotion and even the bartender joined in with us and was asking for updates.  In the end she was victorious and I had to pay our tab for losing.  I’m pretty sure I was going to be paying the tab either way to be honest.  If you’re bored at the bar and you don’t mind acting a little childish I highly recommend this game.