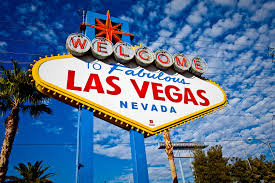 I recently read about the importance of pattern recognition when assessing the past.  Breaking those patterns down and utilizing what I’ve learned to avoid making the same mistakes in the future.  Here’s how I applied those principles on a recent trip to Vegas.

I landed in Vegas at 8:30 PM on the Friday before Memorial Day.  I’m normally not the biggest fan of Vegas.  On my flight I spent time thinking about why I didn’t like Vegas.  What mistakes I have made there in the past and what I needed to avoid.

I had been complaining about “having” to go to Vegas for the past two weeks.  Then I realized how lame that sounded.  I should be thankful I was able to get away from Philly and do something different and possibly exciting.  Many others aren’t as fortunate.

I’ve had rather bad luck in Vegas.  Especially when it comes to gambling.  I’m an addict so anything that feeds that side of me I love/hate.  I lose myself in the bright lights and loud noises.  Delusions of grandeur dance in my head.  I dream about sitting down at a blackjack table and walking out with all my financial problems solved.  Normally the complete opposite occurs.

The best part about Vegas is that you can be whoever the hell you want to be out here.  No one knows you.  Everyone lies.  I listen to their stories, nod my head and smile.  It’s almost as if they are speaking in a foreign language.

I’m trying to figure out the story I will tell people as I write.  Most people in Vegas want to assume I’m an MMA fighter because I’m in shape and covered in tattoos.  Ten years ago I would have gone along with that story.  Today a real MMA fighter might overhear what I’m saying and call me out and embarrass me.  I have to be careful.

Maybe I want to be pilot or an explorer.  Who knows.  No one truly cares out there.  We are all working off the same time table.  We all just want fun stories to tell our friends about when we get home.

My first night I had an issue checking into my room.  I had about 3 hours to kill until I could check in so I ate and hit the tables for 30 minutes.  In those 30 minutes I lost $1000.

The next day I woke up early, hit the gym, went to the buffet and got ready for the pool party at Marquee.  My friend and I got there around 1:45.  Just the two of us.  I wasn’t sure how it was going to pan out because he’s not always the most social guy and sometimes neither am I.

I made the judgment call to start out double-fisting drinks.  It paid off in spades.  Before long I was dancing around while Benny Benassi was spinning.  Girls were everywhere.  All seemed well with the world.

As the day party was winding down I had picked up a 22 year old girl.  She was ready to come back to my room when my friend said some things that made her uncomfortable.  She left and told me to call her later.  He claimed he was doing me a huge favor.  I said she was a hard 6, he said she was 3-4 at best.

We went back to the buffet, stuffed our faces, crashed a nice dinner two British girls were having, got drugs and went back to our room.  I was getting tired waiting to go out for the night.  To pass the time I took a pill of something called Sassafras (it’s similar to Molly).  I had never tried it before, but it was lovely to say the least.

A few girls I knew from California met us at XS that night.  Avici was spinning there. I was out of my head.  At one point I was pretty sure I was having a religious experience while we were dancing as confetti and smoke were flying everywhere.  I witnessed Chuck Lidell’s first Dj’ing appearance.  If I wasn’t having a hallucination, I realized it was time to go home.

My friends were pretty pissed at me because I didn’t  bring the California girls back with me.  But I was too fucked up. My dick wouldn’t have worked. Plus it’s wasn’t my fault they cant close the deal on their own. 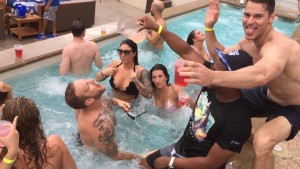 I woke up the next morning feeling horrible.  After a freezing cold shower and popping another pill of Sassafras I was ready to roll.  We headed to Wet Republic and the shit show commenced.

A girl I always wanted to sleep with in college met me there.  We got hammered and hooked up.  I didn’t show up for my flight that night and had to book a new flight in the morning.

I had an amazing time in Vegas.  I met some great people and made amazing memories.  I did the exact opposite of almost every other trip to Vegas and It worked out for the best.  I stayed away from gambling other than the first night.  I had zero expectations of how my days would go or what I wanted to accomplish.  I removed the giant stick I normally have crammed so far up my ass.  When I met new people I was open to taking them at face value and not projecting my insecurities on them.  I enjoyed myself in the moment.